Mistrust between consumer and producer: what's to blame?

There is a great deal of mistrust when it comes to chemicals and the food we eat.

The attitude that surrounds the word "chemicals" tends to be negative and nervous. We think of harmful pesticides, unknown treatments to our food, and the repercussions of consuming those unknowns. We hear stories of how poisons and toxins are used in the preparation of our foods and allowed to be consumed by the unsuspecting public (and we all know what happens when toxic waste flows into our sewers...turtles mutate into superheroes).

And there are cases of dishonesty and irresponsibility in the world of food. The answer to that is not just the organic label, however; it's transparency.

Fear of the unknown

The uneasiness about the unknown is made worse by the shroud of mystery that seems to envelope the producers behind our food.

Say you buy a bag of apples at Walmart or Safeway. Do you know where those apples where grown? Who harvested them? Who handled them? What pesticides were used? And how long were they on a truck or in a distribution center before they were delivered to the store?

Much of the information about how your food is produced is simply left to your faith in the production process. But the distance between farm and plate - both physically and metaphorically - has been growing for some time and our faith as consumers fades dimmer and dimmer as well.

The average consumer doesn't feel like he or she can trust the people supplying their food. What is the root of the problem? Where did this mistrust originate?

Are chemicals the root of the problem?

"Toxic chemicals" often are cited as the problem, but we think that the root of the problem is buried deeper.

The true root of the problem is accountability.

In this sense, chemicals are merely the manifestation of a lack of accountability in the production process; one of the symptoms of the disease, if you will.

The consumers have no window into what goes on at big, industrial farms, whether hydroponic or traditional soil agriculture. The people producing the food we eat are nameless entities. There is no way to contact them- we don't even know where in the world they live.

What is the solution? You will hear several answers.

The Organic (capital "O") label is frequently hailed as the solution to the problem of unknowns.

"Organic" in the mind of nearly everybody equals safety. Organic equals transparency. "You know what you're buying when you buy Organic" is the idea.

If you've read up on the organic label, then Organic might actually equal transparency to you. But many don't understand the true meaning of organic, so the label- while it has a lot to offer the world - it doesn't mean exactly what they thought.

One common example of a misunderstanding is the idea that organically grown produce uses no "chemicals". Read almost any blog on the organic label and at least once you will come across the praise of organic food as chemical-free. Many people believe that eating organic is the only way to eat safe, sustainably grown food. In a post about why people should eat organic, Prevention.com lists this as the top reason:

"1. Avoid chemicals
Eating organically grown foods is the only way to avoid the cocktail of chemical poisons present in commercially grown food. More than 600 active chemicals are registered for agricultural use in America, to the tune of billions of pounds annually. The average application equates to about 16 pounds of chemical pesticides per person every year. Many of these chemicals were approved by the Environmental Protection Agency (EPA) before extensive diet testing. "

The problem is that organic doesn't equal chemical-free. (In fact, "chemical-free" doesn't even exist. The chemicals used for Organic production are just certified based on a set of regulations.) And many of the vague definitions of the word that consumers hold in their heads aren't accurate, either.

And transparency is really what you're looking for, isn't it? You want to know how our food got to be what it is and where it is. We want to know whose hands have touched our food and how long ago it was harvested. Transparency is the key to finding the food you want- safe, sustainable, and healthy. 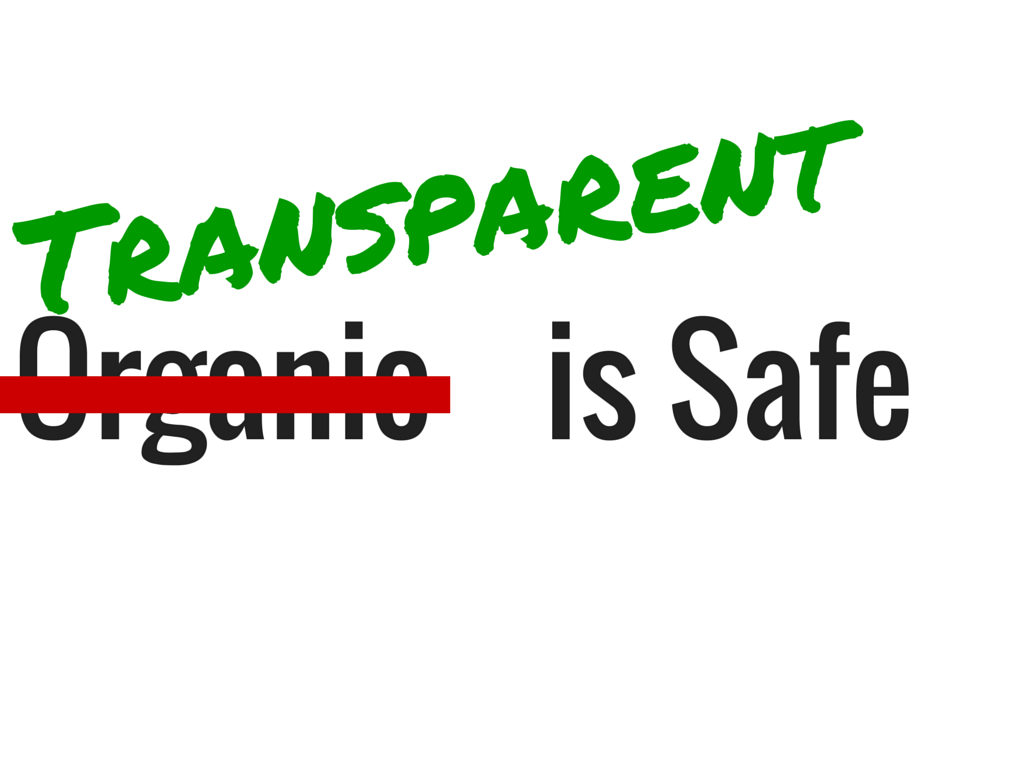 The best thing you can do to find safe food is to buy locally grown produce you can trust. Buy local, and all of a sudden you know who's in charge and where and how your food is being produced.

Can hydroponics be trusted?

As designers of hydroponics equipment, we work closely with people who are coming into the hydroponics movement from all walks of life. If you are familiar with the method, you know that hydroponics requires a nutrient solution, or fertilizer, to be added to the water. Obviously, the use of fertilizing chemicals can be alarming to some people. Maybe you saw the word "fertilizer" and alarm bells went off in your head. Which brings us to the questions:

Well, we're going to give you the inside information on hydroponics fertilizers, and what you need to look out for.

Which hydroponic solutions are safe?

There is a common misconception that plants soak up whatever compounds are in the water around them and, sponge-like, retain those compounds the rest of their life. This is a false idea of how plants work.

The truth is, plants process the same nutrients regardless of where they come from. Nitrate is nitrate. Phosphorus is phosphorus. Weird foreign compounds are not being taken up by the plant. (They can't be. That's not how plants work.)

You know what that means?

The type of hydroponic fertilizer used makes no impact on the safety of the plant as food. Conventional and Organic, when it comes to hydroponics solutions, are obsolete terms.

Now don't misunderstand me: the plants don't care where their nutrients come from, but that doesn't mean we shouldn't.

Different nutrients are collected in different ways, and some of them are completely unsustainable. Harvesting non-renewable resources without care for the future is irresponsible. Whether or not the nutrients in hydroponic solutions have been obtained responsibly is an important part of sustainability.

How to be a responsible consumer

Here's what should influence your choice of food:

"Which pesticides?" you ask.

Well, I'm not going to tell you; your farmer is.

All of a sudden, the curtain between consumer and producer is gone. No more mistrust, no more uneasy purchases, no more health concerns from your food.